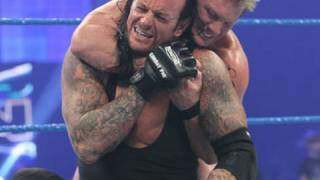 AEW star Chris Jericho is among many former and current wrestlers who have been pouring in their tributes to The Undertaker, who officially finished up his illustrious WWE career at last night’s Survivor Series pay-per-view event.

Through a video message, Jericho congratulated Undertaker and revealed why he has always referred to The Deadman as “The Fonz of the WWE.”

“I just want to say a very heartfelt and appreciative Happy 30th Anniversary to Undertaker, or as I call him ‘The Fonz,'” said Jericho. “I have always called him that because he’s not only the locker room leader but one of the coolest guys I’ve ever met in my life. He’s also one of the funniest guys, always super nice to everyone, and obviously one of the greatest, if not the greatest, performers in WWE history.”

Jericho said while has “over a 100 Undertaker stories” to share, his favorite memory is still the first time he ever shared a ring with The Phenom during a WWE live event in Puerto Rico nearly 20 years ago.

“When you see him on TV, it’s absolutely nothing like being in the ring when that Taco Bell bong hits,” said Jericho. “And you feel the goosebumps when the organ starts and he walks down the ramp. He is one of the most intimidating, most committed characters and performers of all time. You FEEL IT when The Undertaker gets into the ring. You feel it! It’s like electricity. We’ll never experience something like that ever again.”

Jericho said he had “nothing but appreciation, love and respect” for The Undertaker.

“Much love and respect to Mark, The Fonz, and The Madonna of the WWE, aka the guy who is constantly changing his looks and gimmick. The fact that he stayed at top for 30 years is something we’ll never se again. Thanks for being so cool all these years,” said Jericho in his message to Taker.

If you use any of the quotes in this article, please credit Chris Jericho with a h/t to Wrestling Inc. for the transcription.

See below to watch Jericho’s message to Undertaker: