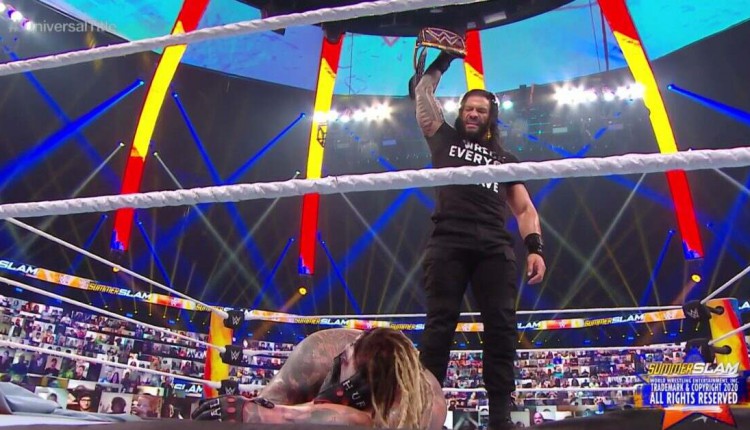 2020 hasn’t exactly been a great year for pretty much anyone. If we’re perfectly honest, 2020 has pretty much been the Lars Sullivan of years. But even in the worst of times, as wrestling fans, we can still find something to be thankful for. Four of them, to be exact. Sure, we probably could have come up with five, or even seven, but four seemed to be enough to hit the minimum threshold to qualify as an article, and that’s good enough for us. Look, it’s 2020! Maybe in 2021, we’ll make a 7-item listicle.

As far as things people wanted really badly but believed they were probably never, ever going to get, a Roman Reigns heel turn was pretty much right up there with Donald Trump getting booted out of office. The jury is still out on the latter; Trump lost the election, but we’ll believe he’s really leaving when he’s out the door. We did get that Roman Reigns heel turn, though, and an alliance with Paul Heyman to boot. And it’s been pretty much everything we dreamed it could be too!

The Rise of the Cinematic Match

Just because a match is cinematic doesn’t necessarily mean it will be good. See the 2020 Money in the Bank match for an example. But more often than not, cinematic wrestling matches have delivered in 2020, such as the Boneyard Match, the Firefly Funhouse Match, Stadium Stampede, Elite Deletion, and Moose vs. EC3. The cinematic match wasn’t invented in 2020, but the coronavirus pandemic forced companies to experiment with it more, and the result has been largely pleasing to the wrestling fanbase.

It was 2020 when AEW launched, and Dynamite murdered NXT in the ratings for the first few episodes, but as WWE said in a press release at the time: it’s a marathon, not a sprint. Well, over a year has passed since the first Dynamite, which certainly qualifies as a marathon, and AEW is still murdering NXT in the ratings week after week. For better or worse, WWE has certainly been paying attention, hot shotting angles, and matches on NXT all year long. Competition makes wrestling better, and 2020 is the first year it’s felt like a truly competitive environment in about two decades.

Dentistry’s Return to Prominence in Wrestling

Not since Isaac Yankum hung up his drill have we seen dentists take so prominent a place in the world of pro wrestling. In AEW, Dr. Britt Baker has ascended to the position of top heel in AEW’s Women’s division and come into her own as a performer in 2020. She even had a match inside an actual dentists’ office at All Out. Meanwhile, in WWE, Roman Reigns returned from his hiatus with a glaringly new set of chompers, so dentistry has been running wild over both of the top wrestling companies in the United States this year.

A prophecy once said that in the comic book industry’s darkest days, a hero would come to lead the people through a plague of overpriced floppies, incentive variant covers, #1 issue reboots, and super-mega-crossover events.

Sadly, that prophecy was wrong. Oh, Jude Terror was right. For ten years. About everything. But nobody listened. And so, Jude Terror has moved on to a more important mission: turning Bleeding Cool into a pro wrestling dirt sheet!