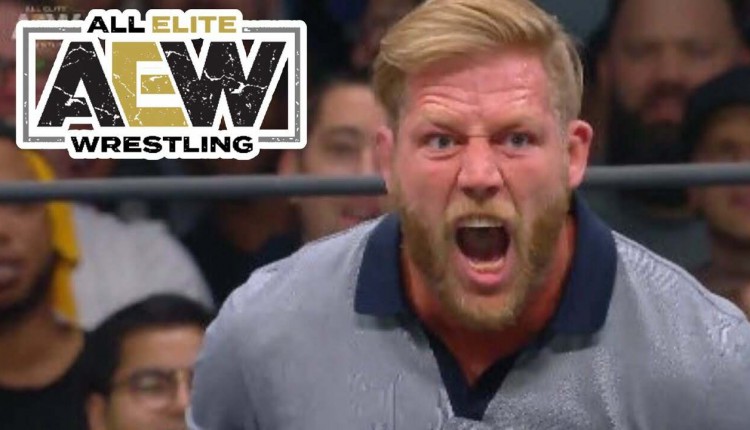 During the latest edition of Chris Jericho’s “Talk is Jericho” podcast, Jake Hager commented on signing with AEW, being nervous before his debut, and more. You can check out some highlights from the podcast below:

On how things came together for him to join AEW: “That was always the goal for me was to use MMA to make me a better pro wrestler. And what’s better than going to the brand new hot promotion? It worked out really well……I still remember after the first fight, we had sat down and talked. I had reached out to Cody, and I think everybody in the world was reaching out to Cody at the time to do it. And you’re like OK, cool. We knew we were kind of on the same page, and maybe it can work out. For me, I reached out again and this was like May around Double or Nothing time, and I’m still not getting anything. I think I told you that and so you reached out and was like ‘Hey man, he said to check back in a couple of weeks.’ I don’t know what changed, but you came back an hour later and was like ‘No man, this is it, they wanna go with you.’ You set us up and I know we had a great phone call with him, and I got off the phone and was like ‘Holy cow, this is a billionaire, this is the owner of the company’ and he was so casual and easy to talk to. It was one of those types of conversations, and hopefully I like to say that my winning personality and endorsement for the Inner Circle helped.”

On being nervous for his AEW debut: “I look back at this year in AEW as the greatest year in my career pro wrestling-wise. Moments like that were really cool – 14,000 people, the debut episode. I was nervous as shit, and I had the easiest thing to do. All I had to do was run out to the ring without tripping and slide into the ring and do a couple of things. You look back at some of the uncut footage that they had from that, it was so cool and the crowd was going so crazy. I think you had to do know we were onto something. And then it was so cool that night they were chanting ‘We the People’ and then the second night, you completely cut it off and they haven’t said it since. What Chris Jericho says goes pretty much. It’s just cool because we are different characters with AEW, so let’s be different.”

On the bar scene in the Stadium Stampede Match: “We really did that with one take. Each part was broken down, but we did it with one take. It was really cool…..really impressed with Hangman’s athleticism – the way he was flipping off the tables and then flipping off the bar, it was scaring me to death. That’s one of the things you have to love about pro wrestling – I keep saying that, but instead of just doing a fight, he’s a cowboy and I’m a big bruiser – why not sit down at the bar first and try to have that traditional movie scene and make it a little bit better? Having that opportunity and having that freedom to add that in there really makes the Stadium Stampede that much better. Could not be more proud of it. That’s definitely far and away the highlight of my year.”