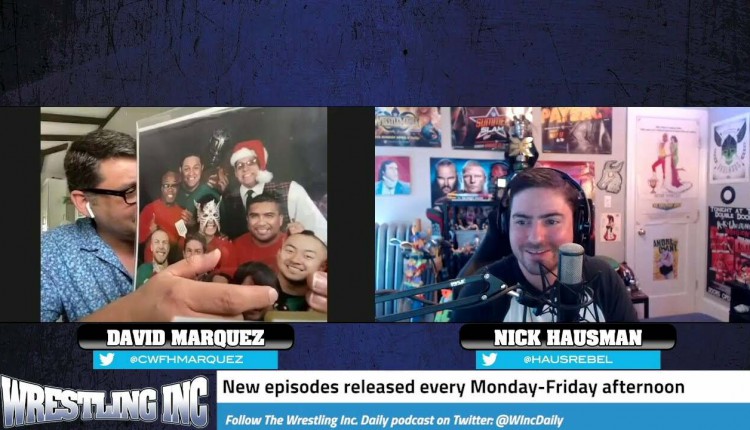 United Wrestling Network owner, and long-time pro wrestling promoter, David Marquez sat down with Wrestling Inc. Managing Editor Nick Hausman and the two chatted about the state of the pro wrestling industry. Marquez discussed the differences between the young talent of today compared to the past.

“I mean, you have to look at it in reality. When I talk to young talent and they ask me my advice and whatnot, it’s like, ‘look guys, you are not in charge,’ and they get so upset when I say that, but it’s true,” Marquez said. “I’m pushing 50. So I’m older. In the big companies, the people who are really in charge, they’re in their 60s and 70s, whoever really controls that money and makes those decisions. Even closer to my age, so 50 plus, we did grow up in a different time, and it is difficult to shed some of the operational pieces of pro wrestling in the mindset with some. Like I said, it’s taken me about a good two, two and a half years to really understand the mentality of today’s performers.

“When I came in, I could easily say that there’s Talent X, doesn’t matter who it is, and a promoter would walk up to them, doesn’t matter the size or scope of the show, could be a local show, could be a big PPV, and a writer, producer or promoter can walk up to someone and say, ‘you are a seven-foot pink dinosaur that spits lavender bubble gum.’ And they would say, ‘great, let’s get started.’ Today, I’d say the same thing, but someone who’s between 20 and, let’s say, 28 or 32, they’ll look at me and say, ‘but I’m not a dinosaur.’ I’m not being facetious. It’s the truth.

“That imagination is gone, that make-believe is gone. I don’t know if it’s because the more modern generation, their toys played with them and told them what to do vs. having teddy bear adventures outside and trees and playing with cars and having to talk for the cars vs. Lightning McQueen talk to you when you press a button and you’re playing with the playsets. The interaction of today’s toys in let’s say the last 10 or 15 years is way different from when I was a child and my generation.”

Marquez continued noting that before you could assign a role to a wrestler with no questions asked. However, nowadays, talents now question their roles they are assigned to.

Hausman noted that gimmicks these days seem to be rejected by fans citing AEW star Kris Statlander as an example. Marquez agreed and noted that shades of grey are needed in pro wrestling because that is a better reflection of society today.

“For sure or even being considered ‘a nice guy’ is bad. That’s part of the problem where in putting the shows together today, it’s so difficult for a guy like me because I do look at things as grey when it comes to presenting certain things,” Marquez admitted. “It’s not black and white when you’re doing wrestling. In your storytelling, in my point of view, you do have a good guy. You do have a bad guy, but it is bent a little bit, and that’s because society’s that way.

“Think about it, I don’t know your situation where you live or anything, but for the most part, if I ask, “do you know your neighbors?” There’s a good chance you’re going to say no. “Do you trust your neighbors?” There’s a bigger chance you’re going to say no. So when you go down the line to your family, your immediate family and your distanced family, “do you know them? Do you trust them?” Then there’s religion and everything that comes out of religion.

Marquez believes that this provides a tall task for talents to get over. He noted that Jim Cornette has many complaints about the industry today because he came from a time where almost everyone was “doing well” in the business.

“That’s why I feel it’s so difficult for people to get over in wrestling by wrestling today,” Marquez admitted. “It has to be outrageous, and it has to be over the top and all the stuff Jim Cornette complains about. It’s because I feel the generation doesn’t understand that what Jim is saying and what other people his age are saying is what and how you get to make money in this business.

“Today, guys are excited when they make $200 and these are top guys. That’s not right, and that’s where the old man screaming at the clouds or whatever comes in because once upon a time, Jim Cornette was a wrestling manager making millions of dollars. Where did that go?”

Hausman mentioned that many believe the money from the business has trickled up to tenured executives like Vince McMahon. However, Marquez rejected that notion and acknowledged that things are changing and everything is different than it was before.

“I don’t think so,” Marquez stated. “Look, I rarely say numbers publicly, but I’ve done very well, and I go by old principles in how to do business. Again, it’s changing. It’s different. A lot of people don’t think like me, which is good or bad. It works for some people. The traditional way of presenting a wrestling show and getting the people in charge in television and media, they’ll understand what I’m doing vs. what others are doing.”

At the end of their conversation, Hausman remarked over how much he learned and joked that he felt like he had to pay Marquez for his insight. Marquez noted that he does not like the idea of paying for a seminar or tryout, and he hopes that a larger conversation can be had over his comments rather than just criticism.

“I don’t like people paying for seminars or tryouts. That’s like paying for a job interview,” Marquez pointed out. “It doesn’t jive with me. I just hope people don’t s–t all over this because they disagree with what I say. Just be open about it and more recently, I had a lot of people jump on me online because I’ve never bowed to fans, especially today’s fans are so all over the place. As much as we need them to be here, they can’t dictate and just enjoy. Please, just enjoy.”

The United Wrestling Network presents Primetime LIVE every Tuesday night, 9/8c, via FITE.tv. Marquez’s full interview aired as part of a recent episode of our podcast, The Wrestling Inc. Daily. Subscribe to get the latest episodes as soon as it’s released Monday – Friday afternoon by clicking here.