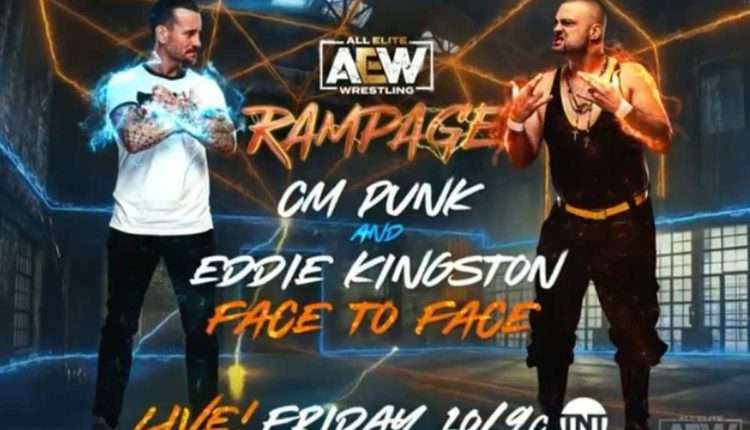 Below are quick results from from Friday night’s AEW Rampage that aired live on TNT from the Chaifetz Arena in St. Louis, Missouri.

In a Backstage Interview – Tony Schiavone spoke with Andrade El Idolo, MJF and the AAA World Tag Team Champions, FTR, who then called out Death Triangle before they face the Lucha Brothers next Saturday at the Full Gear PPV for the AEW World Tag Team Titles.

CM Punk and Eddie Kingston had a face-to-face confrontation.

CM Punk was in ring waiting for Kingston’s apology. Kingston’s music played, but he did not come out. Punk said that knows it is condescending to ask another man for an apology, but he was enraged Kingston interrupted him in the backstage interview with Tony Shiavone. Kingston then said he was sorry, but it was sarcastic, saying he was homesick and was not worried about making Punk angry.

Punk said he thought their future match would happen at Dark: Elevation or Dark its more of Kingston’s speed. Kingston said if he wins, he wants Punk to take another seven-year hiatus. Punk then threw the first punch, and everyone ran out to break it up. CM Punk vs. Eddie Kingston is set for next Saturday at Full Gear.

In a Backstage Interview –Tony Shiovane spoke with Christian Cage and Jurassic Express who said they want to see how tough the SuperKliq is. They challenged them to a Falls Count Anywhere match at next Saturday’s Full Gear.

–Final Opening-Round Match of the AEW TBS Women’s Championship Tournament: Red Velvet defeated The Bunny with the Final Slice to advance in the tournament