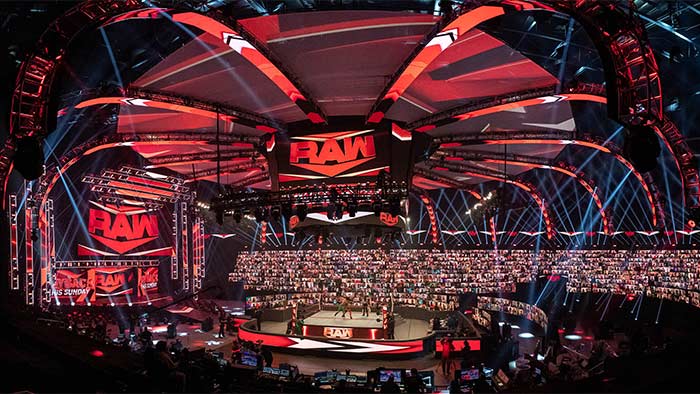 WWE has confirmed the next location of the WWE ThunderDome.

The WWE ThunderDome will move to its third location to the Yuengling Center in Tampa, Florida. The new residency will kick off with Monday Night Raw on April 12, the legendary “Raw after WrestleMania.”

As has been the procedure for the most part since the COVID-19 pandemic began, Raw, SmackDown, and pay-per-view programming will be held on a closed set with only essential personnel in attendance. The press release states, “WWE will continue to administer its health and safety protocols for talent, crew and employees in conjunction with each production, including PCR testing for COVID-19, social distancing and wearing masks.”

The WWE ThunderDome debuted in August 2020 at the Amway Center in Orlando, Florida. The residency switched to Tropicana Field in St. Petersburg, Florida after the start of the NBA season. Now with the MLB season gearing up to start and the Tampa Bay Rays needing Tropicana Field to play their home games, WWE moves to the Yuengling Center for the foreseeable future.

As we reported earlier, WWE will wrap up the next two weeks of Raw and SmackDown tapings, as well as the taping of the Hall of Fame Ceremony celebrating the Classes of 2020 and 2021, next week at Tropicana Field. The residency will officially end on Friday, April 2.

STAMFORD, Conn., March 24, 2021 – WWE® (NYSE: WWE) will bring its world-class viewing experience, WWE ThunderDome, to Yuengling Center as it remains in Tampa with a new residency starting with Monday Night Raw® on April 12 at 8 pm ET on USA Network.

The move to Yuengling Center continues WWE’s longstanding relationship with the state of Florida and marks the next phase of WWE ThunderDome, which launched to critical acclaim last August at Amway Center in Orlando and has continued over the past four months at Tropicana Field in Tampa. Yuengling Center sits on the campus of one of Florida’s largest universities, the University of South Florida.

“WWE has always been a highlight of our event mix and bringing this world-class residency to Yuengling Center only strengthens our relationship,” said Kevin Preast, Executive Vice President of Event Management at Vinik Sports Group. “Hosting WWE ThunderDome is another step towards a full return of hosting more events in the area.”

“WWE takes great pride in providing our fans and network partners with cutting-edge production and one of the most interactive atmospheres in all of television every single week,” said Kevin Dunn, WWE Executive Producer & Chief, Global Television Production. “We look forward to the next iteration of the WWE ThunderDome at Yuengling Center as we continue to take the fan experience to a whole new level.”

To date, more than 650,000 fans from around the world have registered to be part of WWE ThunderDome. Fans can register for their virtual seat to be part of upcoming WWE shows via www.WWEThunderDome.com or at WWE’s Facebook, Instagram or Twitter pages.

Raw, SmackDown and pay-per-view programming will be produced at Yuengling Center on closed sets with only essential personnel in attendance. WWE will continue to administer its health and safety protocols for talent, crew and employees in conjunction with each production, including PCR testing for COVID-19, social distancing and wearing masks.