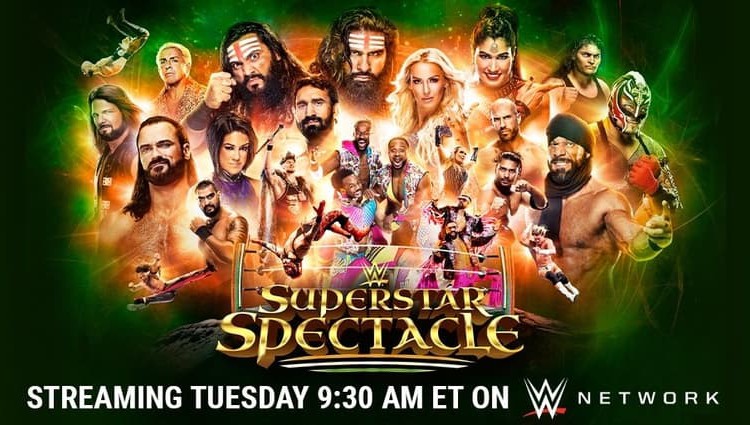 WWE and Sony Pictures Network India announced that WWE Superstar Spectacle will air on the WWE Network Tuesday, January 26 beginning at 9:30 am ET.

WWE Superstar Spectacle, an unprecedented two-hour television special event for India featuring WWE’s Indian performers alongside Superstars from Raw, SmackDown and NXT, will premiere on the award-winning WWE Network at 9:30 a.m. ET, as well as on Sony Ten 1, Sony Ten 3 and Sony MAX on India’s Republic Day, Tuesday, Jan. 26 at 8 p.m. IST, with commentary available in both English and Hindi.

“We love the passion and support from the huge WWE Universe in India, so we’ve teamed up with SPN, the exclusive home of WWE in India, to surprise our fans with an incredible event to kick off 2021,” said Paul “Triple H” Levesque, WWE Executive Vice President, Global Talent Strategy & Development. “WWE Superstar Spectacle will be an epic event with electrifying matches featuring some of the biggest names in WWE along with our incredible Indian performers, plus thrilling and authentic Indian-inspired entertainment.”

“WWE has consistently featured among the top watched sports properties in India over the years,” said Rajesh Kaul, Chief Revenue Officer, Distribution and Head – Sports Business, Sony Pictures Networks India. “We are excited about presenting WWE Superstar Spectacle to WWE fans and viewers in India on Republic Day which will showcase and celebrate the best of the next generation Indian talent in WWE.”

With matches announced in the coming weeks, WWE fans can look forward to witnessing appearances by 10 Indian WWE talent, including:

The arrival of WWE Superstar Spectacle comes at a time when WWE’s popularity in India continues to increase. WWE is one of the most-watched sports properties in India, and India ranks No. 1 for WWE YouTube consumption and No. 1 in WWE Facebook followers. In addition, WWE has been actively recruiting elite athletes and performers from the country. In 2019, WWE hosted its largest tryout in history, where more than 70 top athletes from India showcased their abilities in Mumbai and four Indian recruits were selected to train at the WWE Performance Center in Orlando, Florida, U.S.

Follow WWE social channels for all the latest updates on WWE Superstar Spectacle.