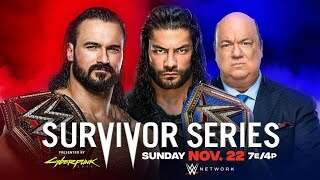 The entire concept of Survivor Series, or rather what Survivor Series has devolved into, has taken the wind out of the sails of what historically is one of the most memorable events of the WWE calendar. The constant struggle for “brand supremacy” that no fan takes seriously has watered down an event that should simply be an old-school, nostalgia based event. WWE seems hung up on the idea that Survivor Series HAS to be SmackDown vs RAW, but it does not have to be that way.

If Survivor Series simply just went back to its original incarnation, with babyface teams and heel teams, with the creative names, and the tag matches being used as a way to further existing feuds between the various heels and babyfaces, the event would be easy to watch and fun. Instead, we get an awkward event where the announcers constantly try to sell the idea that proving that RAW or SmackDown is superior to the other. Nobody is buying it. Just go back to the old formula, it would be something different on the calendar and allow for better storytelling and interesting matchups. Nobody cares about these people in blue shirts beating up people in red shirts.

To me, this match is the biggest match WWE could produce if it had to involve two full-time wrestlers. Reigns and McIntyre are the two most protected wrestlers in the company, and this is the biggest match they could really produce. I hate that we saw it right now with only one week to build for it; to me this is a match you save for the main event of WrestleMania. If they really wanted them to work a match at Survivor Series, I think they should have done something like the old-school Survivor Series matches, with McIntyre and Reigns captaining teams and maybe they face off at the end.

The match was good. It was a classic Heyman-patterned match, with a lot of chaos and big moves at the end. I thought throughout the match that both guys looked really good and felt like big stars. McIntyre in particular, getting in the ring with Reigns and just looking so big and athletic and crisp, he came across like a huge star, even though the loss obviously doesn’t help him.

I want to add that this match probably should have been in the main event. Again, this is the biggest match WWE could really produce right now, and it contains two major stars who are in their primes. Having them play second-fiddle to a bunch of stars from the past to coming out to pay tribute to another star from the past is kind of peak-WWE. The company consistently clings onto its past instead of building for its future.

This was a fine segment for what it wanted to be. The Undertaker came out and cut a short in-character promo, basically announcing his retirement as best as The Deadman character can and then left. There were a bunch of old wrestlers that came out first as well, which was kind of strange because they then immediately vacated the ring, didn’t say anything and were never seen again.

I’m not sure if something has changed or not, but over the summer in his WWE Network special The Undertaker mentioned that if Vince asked him to come back for a match he would do it. Since Vince is constantly looking a “special attraction match” for his major shows (WrestleMania and the two Saudi Arabia shows) and since he rarely feels comfortable relying on the regular roster to deliver that kind of match, he is constantly booking The Undertaker, Brock Lesnar, Triple H or Bill Goldberg to appear on those shows. I think the likelihood of Vince asking The Undertaker for another match is extremely high, so I’m not totally sold on this retirement being legit. I do wonder if his image will be impacted at all by going so far on the retirement stuff, if he does actually come back.

A collection of thoughts about this match:

*Rollins eliminating himself was simply stupid. I understand he is trying to sell some…character. However, if that character isn’t interested in winning matches, why should I care about him?

*Strowman looks great in his current body. He dropped weight and leaned out and looked incredible. He shouldn’t wrestle in a shirt at all. Some of the outfits he has worn lately look like what I wear when I’m going out to rake leaves.

*The hokey shirts are bad and make all of these guys look like interchangeable parts and not like individual stars. Otis looked exactly like the Blue Meanie, and when you realize that the joke with the Blue Meanie’s outfit was that he was supposed to look bad, that isn’t a good thing.

*I didn’t like the idea of the clean sweep, mainly because it prevented any individuals from really getting anything out of the match. Survivor Series works well when one wrestler gets out-numbered and fights to eliminate a few opponents to even the odds. That would have helped someone like Jey Uso, if he had gotten some pinfalls. Outside of Otis, who got to run wild for a minute, I don’t think anyone really gained something from being in this match.

This was a match between the two best in-ring performers in the history of WWE’s women’s division. They didn’t have the all-out-five-star-classic that they probably could have had if they wanted too, but it was a very well executed back-and-forth match that left a lot of things on the table for what should be a much bigger match at some point. From a technical standpoint, this was easily the best match on the show.

So the work in this match was generally not good. The rivalry between Sasha Banks and Bayley spilling over multiple brands helped mask the fact that the main roster lacks depth in its women’s division, especially with Charlotte and Becky Lynch out of action. There is a massive gap between Bayley, Banks, Asuka and everybody else on the main roster, and that was apparent in this match which was mostly filled with inconsistent work and forgettable action.

While the work was very meh, I will say this match at least strung together a real storyline. Lana winning the match might have felt stupid, but at least its consistent with the story WWE is trying to tell with her. I don’t think it will help her get over, but the consistency is an improvement from what we normally see in WWE. I will also add that Belair was able to shine in this match in a way that was lacking in the men’s match. She feels like a bigger star after this match, which can’t be said about anyone in the men’s match.

New Day vs The Street Profits: **¾

A number of weeks ago, WWE had an actual segment where the two tag team champions had swapped brands, so they agreed to simply exchange the tag belts, so that the draft would make sense. Since WWE knew that these two teams would likely be facing each other at Survivor Series the following month, it would have made sense for them to show some tension between the teams, and to start to build towards a match that people might actually care about. Instead they did nothing, trading the titles like kids at an elementary school lunch table swapping snacks, and they had a match at Survivor Series that had no heat. The work was fine though.

Sami Zayn works hard with his coward heel character, but I just don’t see it going any further than mid-card comedy, which is too bad because he’s really talented. The Hurt Business are going to get over as babyfaces because they are booked really well; particularly because they are really smart and don’t fall for the cheating heels’ tactics. This was actually a really good match if you just think of it as a way to make the babyfaces look really good. Lashley is one of the most protected names in the company and is almost always booked to look dominant. He is 44 though, and they’ve never gone all the way with him.