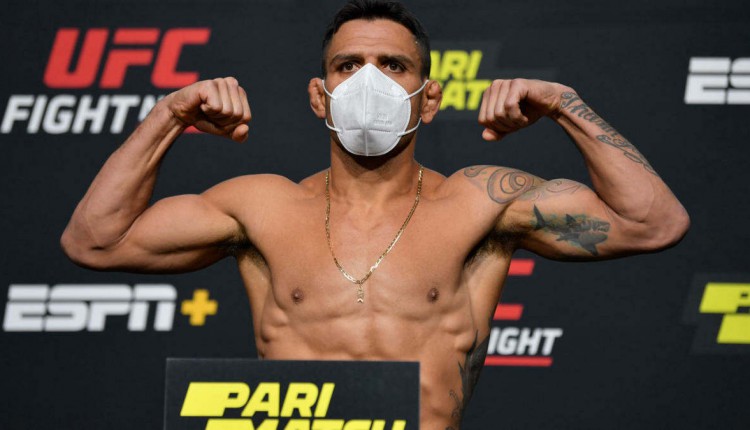 When Rafael dos Anjos looks back on the last two years of his UFC career, a stretch of characteristically difficult matchmaking that netted four defeats in five bouts at welterweight, the former 155-pound champion paints a picture of a complacent fighter who was no longer doing what got him there.

“I think it was the lack of training, lack of sparring partners. I was too much in my comfort zone,” dos Anjos told “Morning Kombat” on Wednesday. “I was too much like, ‘OK, that’s enough for me.’ But I still had a lot [left] of me and I can push hard. I proved that when I went [back] to Brazil.”

Fresh off an intensive and bare bones training camp that began not too long after his January loss to Michael Chiesa, dos Anjos (29-13) purposely set out to reconnect with the RDA he used to be. The same guy who lost his pro debut way back in 2004 and opened his near-legendary 16-year career with a record of 2-2 through four fights.

Although his opponent has changed for Saturday’s main event of UFC Fight Night at the promotion’s Apex facility in Las Vegas from the upstart Islam Makhachev (18-1) to the gritty (and higher ranked) Paul Felder (17-5) on just five days’ notice, the thing that most needed change in dos Anjos’ fighting life was himself.

Four years after losing his lightweight title to Eddie Alvarez via first-round knockout during a time in which dos Anjos admitted he nearly died trying to cut weight, the 36-year-old is moving back down from welterweight. And it was a return to his native homeland for nearly half of a grueling eight-month resurrection in which dos Anjos began to feel for the first time the same fighting spirit within him that was last there in his title-winning upset of Anthony Pettis in 2015.

“I parked my car down at the favela and climbed the hill to train and it made me see all the guys [there] that are struggling,” dos Anjos said. “I saw myself in that position and those shoes. It made me give a lot of value for what I have today and it was a great experience to be in Brazil for this time that I was there.”

Nothing about the three-month Brazilian training camp for dos Anjos was easy. Both he and his family contracted COVID-19 and were locked down in an apartment for two weeks. It was a trial RDA explains as very much God’s plan.

When dos Anjos would previously attempt to cut down to lightweight, he would begin from a walk around weight of 196 pounds. This time, a complete overhaul of his nutrition thanks to a restrictive diet allowed him to trim that starting base down to 176 pounds.

“I just changed my way of life and my way of living,” dos Anjos said. “My last fight [at lightweight] when I fought Eddie Alvarez wasn’t the real RDA so we are going to see a different guy this Saturday, for sure.”

The reasons for dos Anjos’ recommitment to his preferred weight division after a 4-4 run at welterweight are varied. Without question, he believes there’s still more left in the tank for another title run. He also desperately wants to avoid becoming nothing more than a name UFC matchmakers use to help young fighters get noticed.

“I have a two-year old at home and I have to provide for them,” dos Anjos said. “Nobody else will do that, I have to do that. That’s why I decided to reinvent myself and reinvest in my career. I am doing the right things and I don’t want to hang on UFC just to be a UFC fighter. I want to have the belt around my waist and the No. 1 spot. I’m a very competitive guy and I don’t want to lose. I made the adjustments I have to make and I will be the light heavyweight champion again. I have that mindset.”

Not only does dos Anjos prefer the style of the orthodox brawler in Felder to the southpaw wrestler of Makhachev, he believes the opportunity for reward by beating the No. 6 ranked fighter in the sport’s deepest division will be bigger. And RDA believes he will have the edge from the standpoint of hunger given that the 35-year-old Felder, who only accepted the five-round fight because he was in shape while training for a triathlon, is already talking about a possible retirement.

“[Felder] is a guy who comes to fight and has a lot of heart but I think the difference between me and him is something he said in an interview. He said, ‘OK, let’s fight. I have nothing to lose,'” dos Anjos said. “Yeah, he’s right. I have a lot to lose. I have a lot on the line and I think that little mindset will make a lot of difference in this fight. If I’m going to lose, you guys are going to have to take my dead body from the Octagon on Saturday night.”

This may not be one of the deepest cards UFC has put out in 2020, but it still has some intriguing matchups for fans to follow. Among the more interesting is Brendan Allen taking on Sean Strickland at a 190-pound catchweight. Allen, the 24-year-old middleweight prospect, was supposed to face Ian Heinisch a week ago. However, Heinisch tested positive for COVID-19 and the fight was canceled. Now, the fighter riding a seven-fight win streak dating back to 2018 gets a tough out in Strickland, who is 6-3 since 2015.

It’s hard to overlook just how many questions each fighter will need to answer once they step into the cage. How much will taking a fight on such short notice affect Felder considering he hasn’t been training for contact? And how much of a toll will cutting down 15 pounds so late in his career have on dos Anjos?

From a betting standpoint, the oddsmakers seem split as RDA has been installed as a slight favorite. One thing that is certain from a stylistic standpoint is that the expectations for violence remain huge.

While both are dirt tough, dos Anjos has proven to be a higher caliber fighter at his peak. Just how far removed from that peak he will be on fight night certainly remains unknown. But if you can believe in his commitment level to rediscover the hungry animal within him and take into account the lack of a fight-specific training camp for Felder, this remains a fight RDA should win.