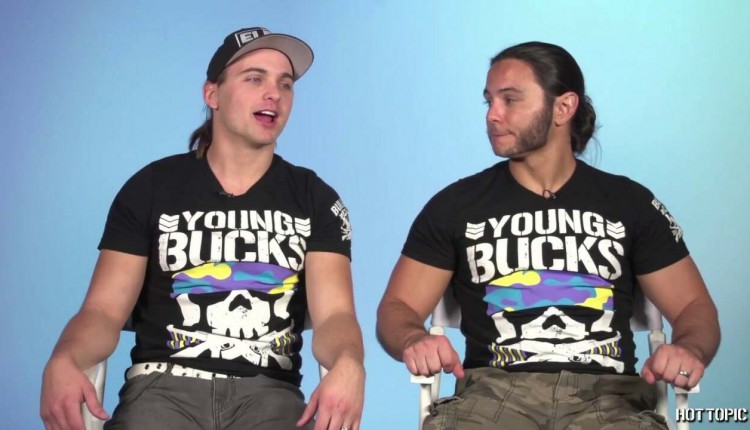 On a recent episode of the Talk Is Jericho podcast, The Young Bucks, Matt and Nick Jackson, were on to discuss their new book “Killing The Business: From Backyards To The Big Leagues”. Chris Jericho asked The Bucks more about how their deal with Hot Topic came together. They noted that their rise came at the same time as Pro Wrestling Tees, and they noted that Being The Elite and Bullet Club were also big helps in their popularity.

“Our shirts, they got popular off of Pro Wrestling Tees basically. That’s where everybody picked them up,” Matt noted. “We grew with them. We were one of the first five wrestlers to open up a shop with Ryan Barkan at Pro Wrestling Tees. We got really good at designing shirts because at that point, we weren’t afraid to try things, because if people hate it, they don’t buy it. There’s nothing in stock. There’s no loss.

“So we started really experimenting with funny things and great ideas, designs that maybe I wouldn’t print up 1000, maybe I’ll get stuck with 999. Any time we would say a thing or do a thing, we would have a shirt the next day, and you could never do that in the t-shirt business. It would take weeks to get a shirt, and here it is, I would say something on a Saturday or have a viral video, and by Sunday, I have a new shirt. That’s what changed the business for us, and that’s what got our shirts everywhere.

“And we started our YouTube show, and that helped a lot too because we would promote our shirts on the YouTube show and say, ‘hey, they’re available now.’ And we would noticeably see how many we would sell when we would release an episode on Being The Elite,” Nick recalled. “It was just crazy… We had a platform for everyone to see not just at this indie where 400 would see us. So, that changed the game, was YouTube. That helped tremendously.

“It obviously help that Bullet Club just went nuts. Everyone wanted the Bullet Club t-shirt. We were a part of that, and that blew up like crazy.”

That popularity led to almost everyone wearing a Young Bucks or Bullet Club shirt. The Young Bucks said that people at Hot Topic saw that, but they first went to WWE to ask about putting those shirts in their stores. They talked about how popular the shirts became and how the initial run of shirts led to more merchandise being sold.

“There’s a WrestleMania where we are the peak of Young Buck popularity,” Matt recalled. “Bullet Club shirts are everywhere all weekend, and the buyers, it was Joe and Taffy, they were at the show and all they saw was Bullet Club, Young Bucks [and] Kenny Omega.

“You know how WrestleMania is – it’s a weekend of just events,” Nick added. “So they went to a bunch of the events and they kept seeing these Young Bucks t-shirts, Bullet Club t-shirts.

“They were just blown away, and they’re like, these are the shirts we need at Hot Topic,” Matt said. “No offense to all these other shirts, this is what I’ve seen the most of.

“They contacted WWE,” Nick revealed. “They said, ‘We want The Young Bucks t-shirts and the Bullet Club t-shirts,’ and they go, ‘Uh, they don’t work for us. Go find someone else.’

“So they get in touch with Ryan,” Matt continues. “Ryan tells him, ‘Yeah, I work with these guys,’ and Ryan got with me. And I talked to Hot Topic, and they said, ‘We would like to put some of your shirts in our stores.”https://www.wrestlinginc.com/news/2020/11/the-young-bucks-recall-hot-topic-trying-to-contact-wwe-677465/”Absolutely.’ So we made a deal to get Young Bucks stuff in, and Ryan, who worked with New Japan, he got a licensing deal to get the Bullet Club stuff in. They were just going to start with Bullet Club stuff and Young Bucks stuff, and they were going to try it in a couple of the shops.

“It wasn’t many, just to see what it would be like, and the eleventh hour, they decided, you know what, we’re gonna throw Kenny’s in there too because we want the three. So we started with the three, and I don’t remember the exact number of stores, but they put them out. They said they’d never seen anything like it, they were sold out immediately. So within, I want to say 24 hours, Hot Topic already reached out to me and they’re like, we’re going to every story in North America. We’re like, ‘oh my God.'”