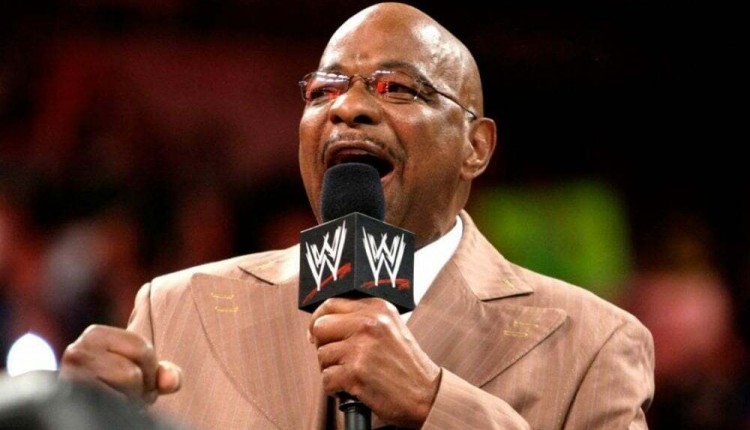 WWE Hall Of Famer Teddy Long was the guest on Kevin Sullivan’s “Taskmaster Talks” podcast. Long was on the show to talk about his career in WCW and his jump to the WWE.

Kevin Sullivan told Teddy Long, “I came up with the idea of making Ron Simmons the World Heavyweight Champion on Martin Luther King Day and have Coretta King give Ron the belt with Martin Luther King III there. Ole (Anderson) said, ‘That’s not going to draw money.’ I said that’s going to make national news. Ole said, ‘For a day, maybe.’ Ron Simmons was the perfect guy to do that with because he was new. If we had done the Goldberg angle with Ron it would have worked just as well I think. When you saw Simmons walk down the aisle, you knew you were watching a real athlete just like Goldberg and you knew you were watching a kick ass guy.”

Teddy Long talked about The Undertaker when he was in WCW as Mean Mark: “Mean Mark Callous was absolutely fantastic. That’s the way I got a chance to really meet the Undertaker. I had the opportunity to manage him back in the day which was really a feather in my hat and then after I got in WWE, I got involved in another big storyline with him where he kidnapped me and had me in the coffin. That storyline was created by Vince McMahon himself. For me to be working with Taker and Vince McMahon, it doesn’t get any better than that. He (Undertaker) was the same guy (in WCW and was one of the nicest guys in this business. He always tried to help people. I watched him come back to TV and before he has to go out and do whatever he has to do, he will come out during the day during rehearsals, and on his own, step in and try to help guys. Nobody asked him to do anything and he will just step in and do stuff on his own. I could always go to him if I had problems with other people and he would always watch my back. Not only me, but everybody so Taker was one of the nicest guys in this business and I have a lot of respect for him.”

Teddy Long said he was set up to be fired in WWE when he got there: “Jim Ross was in charge of talent relations. Jim Ross called me about coming in as a referee. That’s how I got the job there. I started refereeing. I don’t know about this, but what I heard was certain people didn’t want me there being a referee so they had somebody lay down that would not kick out on me so I counted to three on somebody I wasn’t supposed to count three, but if I’m a referee and you don’t kick out, I count three. That’s what I did. I came to find out I was set up and that was supposed to happen so they could fire me. They sent me home after that and that happened in Hawaii. They sent me home and I wasn’t worrying about it anymore. I then got a call and it was John Laurinaitis and they said they needed me to come to Providence, RI and said Vince wanted to bring me in as a manager. I heard before that happened that they talked about managers and they threw Ernest The Cat Miller’s name around. That’s who John Laurinaitis wanted to bring in and Sgt. Slaughter, Earl Hebner and Michael Hayes brought my name up and said I could talk. Vince said then bring him back in here.”

If you use any portion of the quotes from this article please credit Taskmaster Talks with Kevin Sullivan with a h/t to WrestlingNews.co for the transcription.