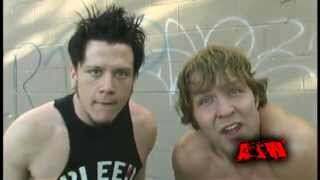 Former Impact World Champion Sami Callihan is the latest to react to the developing partnership between AEW and Impact Wrestling.

“The Draw” tweeted out a gif of someone pulling out a switchblade knife, indicating a possible reunion between Callihan and Jon Moxley, who were known as The Switchblade Conspiracy during their years on the independent circuit [mostly at Combat Zone Wrestling].

Impact Wrestling executive Don Callis helped Kenny Omega defeat Moxley to capture the AEW World Championship on this week’s Winter is Coming episode of AEW Dynamite. The show ended with Callis announcing that Omega will appear on next week’s Impact Wrestling on AXS TV to explain the unforeseen turn of events.

“@AEW screwed @AEW. Hear all about it this Tuesday on @IMPACTWRESTLING on @AXSTV. Thanks for the invite @TonyKhan,” Callis tweeted after Dynamite went off the air.

As noted, a number of Impact Wrestling and AEW stars have already reacted to the partnership between the two companies. There are also rumblings on social media of Moxley possibly invading Impact Wrestling on Tuesday and confronting Moxley and Callis.