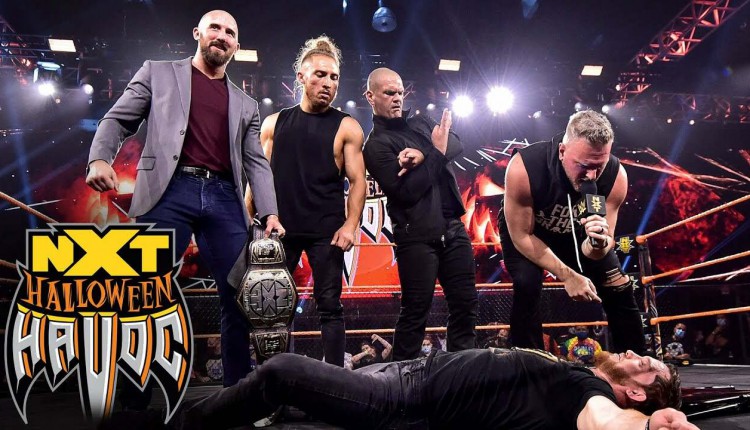 Pete Dunne was reaching new heights in WWE this year. A unique pairing with Matt Riddle proved successful as the two won the Dusty Rhodes Classic 2020 and had a solid run as NXT tag team champions. That was until the pandemic forced Dunne to relinquish his title. The UK superstar moved to the United States, but a few weeks across the pond to get a visa renewed turned into eight months away from WWE TV.

Time he used wisely by transforming into arguably the best shape of his life. A few weeks ago he got the call he had been waiting for. The call back to NXT to continue what he started.

“It was very sudden actually,” Dunne said of the planning for his return. “At the same time, when I left with my visa came up for renewal and everything shut down it wasn’t a simple process. When it started moving, it all happened pretty fast. It was in the space of a couple of weeks. Hearing it would be at Halloween Havoc, I liked the chance to be back. It was building up when I got to do that little bit for NXT UK and got to help backstage there. It helped scratch the itch a bit, but it felt great to be back and focus on something as big as War Games coming up.”

Dunne came back with a vengeance, joining Pat McAfee’s new faction along with Danny Burch and Oney Lorcan. The “Bruiserweight” was a big shot in the arm for the NFL alum and his “Kings of NXT” as things heated up in their rivalry opposite The Undisputed Era.

“It feels like a winning combination for me. I’ve always sort of let my matches and the performance do a lot of the speaking. That’s what I have become known for, putting on those kinds of matches. Then aligning with someone like Pat has given me this sort of different angle,” Dunne said. “It’s a different approach and interesting. Say what you want about him, but [Pat] is so charismatic and knows how to get a reaction.

“For me, it’s something completely different. Now I get to have a bit more of an edge. It has been building since I’ve been away. Now I get to come back with a different look, different mantra and hopefully it is coming off on TV. The more edge to myself. I’m also really happy for Oney and Danny too, who I’ve known for years and years. Especially Danny, who I’ve known for such a long time in the UK. Now they are finally getting the props they deserve and being put in the position of something as massive as being put in a match at War Games.”

Dunne calls McAfee a natural on screen and behind the scenes. He sees a lot of potential in their future dealings.

“He is a very charismatic and an open person to get along with. It’s more about wanting to come out and put out the best show I can and put on the best matches I can. It’s aligning with people like Pat who gets such fantastic reactions,” Dunne said. “He obviously really cares about wrestling or he wouldn’t be doing it. To have someone feeling excited to be here and involved. Some people are going to be annoyed by him. Some people are going to love him. It’s always great to be surrounded by people like that. They are always good for wrestling.”

War Games will always have a sweet place in the 27-year-old’s heart. And it wasn’t only because the 2018 team of himself, Ricochet and the War Raiders were successful against The Undisputed Era. Dunne was becoming a dad.

“War Games for me personally is special because two years ago was a huge turning point in my life. Because in that same period I broke my foot and still managed to be involved in the match. That date was my daughter’s due date,” he said. “We risked it, and I went anyway [for the match]. I’m on the top of this cage at the end of the show, I come down, and find out [mom] is in labor.

“I managed to make it just in time for the birth of my daughter. For me, the biggest turning point of my life will be the War Games match. It means alot to me.”

Another two-ring caged battle is on the horizon for the longest reigning NXT UK champion of all-time. This time he is part of Pat McAfee’s team facing familiar foes in The Undisputed Era. He is looking for a similar result at NXT TakeOver on December 6 as the last time.

“As far as NXT, every year there are these stakes, especially now there are two War Games matches,” he said. “You have to go out there and put on a show and that gets more difficult when you have Ricochet doing moonsaults off the top of the cage. Every year it gets a little more hard. You have to be a little more creative. You have to be more fired up for it. And it’s a challenge we all embrace. I can’t wait to go out there.”

Check out more with Pete Dunne on Monday’s edition of the PWrestling.com.