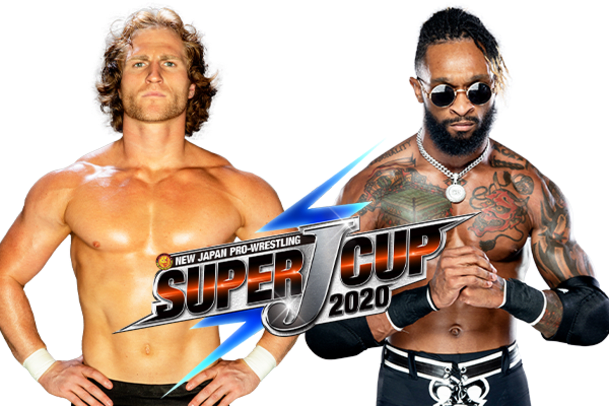 It was announced earlier this week by NJPW that the Super J-Cup Tournament will be returning next month on December 12th.

Eight Junior Heavyweights including last year’s winner from different promotions around America and Japan vie for the winner’s golden jacket.

Today NJPW revealed the brackets for the tournament. Here is the bracket:

Preview (via NJPW) – NJPW fans will be getting a look at IMPACT Wrestling’s young sensation Chris Bey for the first time in Super J-Cup 2020, and his mettle will be tested by an NJPW grown Young Lion in Clark Connors. Connors will look to ground Bey’s high flying style and use the same explosive strikes and Boston Crab submission that secured him victory in the Lion’s Break Crown on NJPW STRONG; in his second Super J-Cup, can Connors break through to the second round, or will Bey make the bigger impact?

Preview (via NJPW) – ACH and TJP have gotten to know one another pretty well in recent weeks on NJPW STRONG, having teamed with one another on a regular basis. Add in their similar career paths, from NJPW to WWE and back, and this should be a fascinating match to see. The two have wrestled one another on the independent scene once earlier in the year, with TJP getting the edge, but with the stakes so very high in this rematch, will ACH make good on his claim of ‘taking all I deserve’, or will the Fil-Am Flash advance?

Preview (via NJPW) – A high flying spectacle is guaranteed in this first round meeting. Experience may play an edge, as Horus has wrestled at length in both Mexico and the US before landing in his current home at ROH, while Christian’s career is far younger. Yet as we’ve seen in recent weeks on NJPW STRONG, ‘All Heart’ can never be discounted, and Christian will be hard to stop as he tries to soar to the final four.

Preview (via NJPW) – The last match of the first round is a dream encounter indeed, Lio Rush wrestling in the cerulean blue for the very first time against the winner of last year’s Super J-Cup El Phantasmo. This will no doubt be a spectacular matchup between two young and very self confident athletes. Will ELP take a strong first step to retaining his winner’s jacket? Or will it be a Rush to the second round?

Tag Team Action between the Rounds:

Preview (via NJPW) – Between the first and second rounds, and between the semi and final matchups, we will see tag team action, including the first appearance of Ren Narita on NJPW World for over a year. After a second place finish in the Young Lion Cup in 2019, Narita headed to the LA Dojo on excursion, and now viewers will get a rare chance to see Narita during this process. He teams with the man who beat him to the Young Lion Cup in Karl Fredericks as they face the BULLET CLUB tandem of KENTA and Hikuleo. Hikuleo is BULLET CLUB’s own Young Gun who has been undefeated since returning to action Friday nights on STRONG, while KENTA’s past with Fredericks is well documented in its own right. Don’t miss this encounter! With more tag action to be announced, this will be an unmissable event, and all the action will be brought to you in English on December 12!