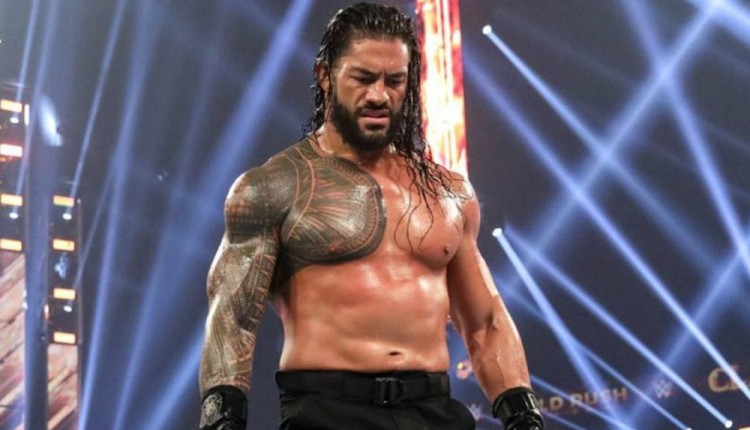 As noted earlier, WWE taped this week’s episode of SmackDown on Tuesday so they could give the wrestlers the day off for Christmas. F4WOnline subscriber jackfoley posted more details from the tapings on the F4W board.

An interesting note from the lumberjack match is that Angel Garza was one of the lumberjacks. It’s not clear if he was moved to SmackDown or if this was a one-off but it’s odd to have him as a lumberjack when there are other SmackDown wrestlers backstage who could have been used in that spot.

I’m currently in the WWE Thunderdome for this week’s SmackDown tapings, I thought you might wanna know what’s gonna go down. I’ll update the thread during the night.

They opened straight with the WWE Universal Championship match between Roman Reigns and Kevin Owens. Smart, considering this is probably gonna come right after the NFL lead-in on FOX.

Really good match, Reigns retained after Jey Uso cuffed Owens from outside to the cage preventing him from exiting the cage. Roman realized it and very, very, very slowly exited the cage with Owens telling him pretty much “you should be ashamed of retaining like this, yadda yadda”. It was a good scene.

After that there was a LONG pause (about 10 minutes) where they had the virtual fans tape generic cheers and boos reactions for future use.

Charlotte Flair and Asuka then came to the ring for their tag titles defense and were joined by Bayley, Sasha Banks, Bianca Belair and Carmella. Sasha actually dropped her title during her entrance, which for sure will be edited off the broadcast (Sasha actually mouthed on camera “we’re gonna edit this out” as Bayley was pointing at her and laughing about it, which was pretty funny). Turned out it was a triple threat ELIMINATION tag team match for the tag titles, happening right now. Long match, first elimination after Sasha hit Bayley with a frog splash and pinned her, eliminating Bayley and Carmella (which again begs the question: why did Bayley beat Bianca last week?). Later in the match, Charlotte blocked Sasha in the Figure 4 and Bianca used her hair, from the apron, to tug Sasha to her corner and tag her in, which was unique. Sasha hit Charlotte with a Meteora (a bit long, I actually thought her knee hit Charlotte straight in the face) and nearly killed herself with a very bad head scissors to Carmella’s sommelier (which is now officially named “Reginald”). Bayley returned to hit Sasha and prevent Bianca from tagging her partner in and Charlotte returned to the match finishing Bianca off with Natural Selection for the pin (so Bayley was pinned again, but at least she cost Bianca the titles). Charlotte and Asuka retain and will probably face the Riott Squad soon, since they made a point to show them watching the match from backstage.

Street Profits promo from backstage interrupted by Sami Zayn berating a Social Media employee asking her to tell him who leaked his “rant” from last week. Employee walked away, Street Profits gave Zayn a t-shirt that said “I WAS the Intercontinental Champion”,

Bryan vs Jey Uso was supposed to happen but Jey attacked Bryan during his entrance and bodyslammed him on the ramp. After a commercial break, Bryan entered the ring against Pat Buck’s advice and the match started. Another long match (every part of the show so far has gone 2-3 segments), Jey Uso injured his left knee during the match, which played into the ending. Jey hit the Superfly Splash on Bryan but was too slow to pin him because of the impact on the injured knee. Bryan put Jey first in the LeBell lock, then a half crab but Jey reached the ropes. Jey went for a superkick but Bryan avoided it and finished him with the Busaiku knee for the win.

Up next, the Lumberjack Match for the Intercontinental Championship between Big E and Sami Zayn, which will be the main event. Lumberjacks were: Cesaro, Nakamura, King Corbin, Blake and Cutler, Akira Tozawa, Angel Garza (so yes, Raw guys can be used as Lumberjacks on SmackDown for some reason), Street Profits, Otis, Chad Gable, Drew Gulak, Lince Dorado, Apollo Crews, Dolph Ziggler, Robert Roode and Kalisto (interestingly in the heel side). Heel lumberjacks, as usual, made sure to hit the babyface, Big E in this case, and after about 4 times of doing that, the babyface lumberjacks brawled with them. Sami tried to escape during the melee but the face lumberjacks carried him on their shoulders to the ring. Big E hit him with a belly to belly, a running splash and a Big Ending for the win and the title change to close the Christmas Day edition of SmackDown with all the babyfaces celebrating and confetti filling the arena.