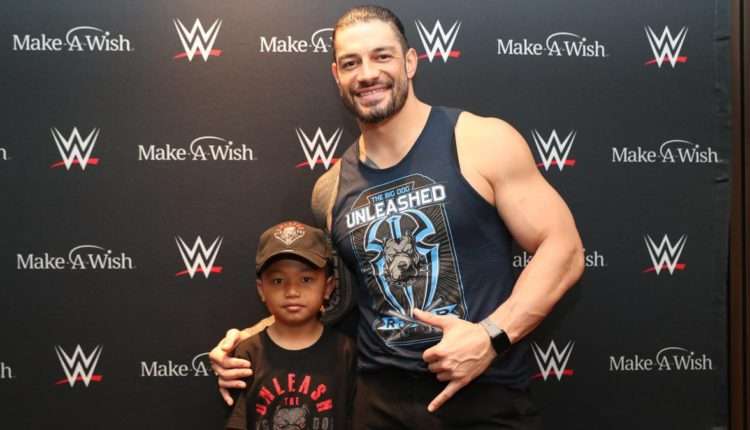 Make-A-Wish America has awarded Roman Reigns, JoJo Siwa, Night, Patrick Mahomes, Seán McLoughlin, Shawn Mendes, the Texas Rangers and T.J. Oshie with the Chris Greicius Celebrity Award for playing a pivotal role in furthering the Make-A-Wish mission. These individuals and organizations provided their time, talent, and significant influence to grant wishes and drive fundraising results for the world’s largest wish granting organization, allowing more children to experience wishes that can help them deal with and overcome their critical illness.

Roman Reigns: WWE Superstar Roman Reigns has inspired many wish kids with his confidence and courage both in and out of the ring, especially given the health challenges that he has had to overcome. As tough as his in-ring persona can be, he’s nothing but kind and caring when he spends time with wish kids. Roman has also been incredibly generous with his willingness to participate in promotional videos and campaigns that help raise money to grant more wishes.

JoJo Siwa: As an actress, singer, entrepreneur and dancer, JoJo has gained popularity with wish kids who admire her versatility and authenticity. Since her first wish in 2017, JoJo has gone on to grant 30 wishes – often making time for wish kids in the midst of filming TV shows and on tour. Last holiday season, she helped grant a wish in conjunction with the Macy’s Believe campaign, helping bring awareness to the campaign that has raised more than $25 million for Make-A-Wish.

Night: Night is a multimedia talent management company that represents some of the most requested YouTube creators among wish kids. They’ve helped to facilitate 19 wishes for the likes of Mr. Beast, Preston, Unspeakable, Lankybox and ZHC. The entire team has rallied behind Make-A-Wish encouraging their talent to not just grant wishes, but also find opportunities to financially support the organization.

Patrick Mahomes: Kansas City Chiefs quarterback and NFL MVP Patrick Mahomes hasn’t skipped a beat when it comes to granting life-changing wishes during the pandemic. Before each virtual meeting with a wish kid, Patrick sends care packages with merchandise and autographs to the wish kid’s home, so they can hold onto something that reminds them of their wish forever. He has also made several donations to the chapter through the 15 and the Mahomies Foundation that he started to further his impact in the community.

Seán McLoughlin: YouTube creator Seán McLoughlin, known by fans as Jacksepticeye, counts many wish kids among his 27 million subscribers. He has granted 29 wishes since 2015, regularly meeting kids at conventions in between his sold-out panels and meet-and-greets. In 2019, Seán also became the first influencer to host a charity stream for Make-A-Wish that crossed the six figure milestone, raising $150,000.

Shawn Mendes: Despite being one of the most popular musicians in the world, Shawn always finds time to put wish kids first. He’s granted an impressive 58 wishes to wish kids since 2015. Shawn has even granted 9 wishes virtually during the pandemic because he understands that wishes are more important now than ever.

Texas Rangers: The Texas Rangers baseball organization has been a supporter of Make-A-Wish for more than two decades. They host volunteer appreciation events at games, provide media support through advertising, and most importantly, facilitate wishes to meet their star-studded roster of players. In addition, the organization’s “Texas 2 Split” raffle during home games has raised enough money to grant nearly 20 wishes in the past 4 years alone.

T.J. Oshie: Since joining the Washington Capitals in 2015, all-star T.J. Oshie has been active with the organization’s efforts tied to Make-A-Wish. Not only does T.J. spend time with wish kids who have wished to personally meet him, but he also recently sponsored a wish through his apparel company, Warroad. Thanks to Warroad’s donation, 6-year-old Dylann’s wish for an indoor, backyard, synthetic hockey rink was able to come true.

The Chris Greicius Celebrity Award – now in its 31st year of existence – is named after Chris Greicius, the 7-year-old boy whose wish to be a police officer inspired the creation of Make-A-Wish in 1980. Since then, Make-A-Wish has gone on to grant more than 500,000 wishes worldwide thanks to the generosity of everyday people and celebrities alike.

“We know that wishes help children build the physical and emotional strength they need to fight a critical illness,” said Shaina Reeser, director of entertainment and sports relations, Make-A-Wish America. “Wishes allow children with critical illnesses to replace fear with confidence, anxiety with hope and sadness with joy – none of which would be possible without the help of these celebrity wish granters and other supporters nationwide.”

To learn more and find out how you can join these celebrities in helping make wishes come true, visit wish.org.