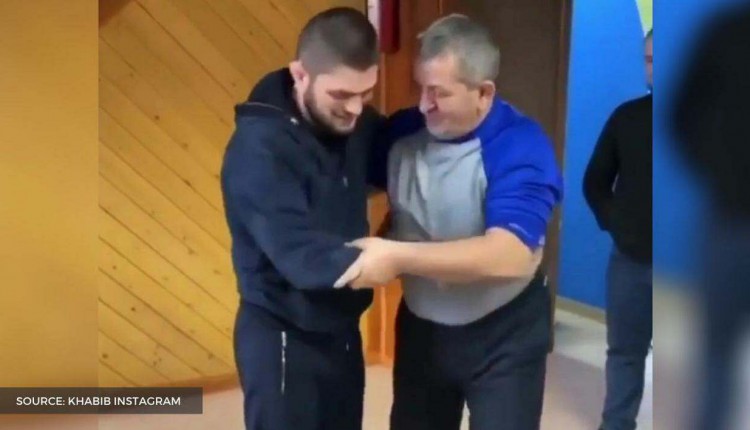 Khabib Nurmagomedov continues to hail the importance of his late father in his successful MMA career even after his UFC retirement. On Wednesday, Khabib took to social media to share an emotional video of him wrestling his father, Abdulmanap, in what appeared to be father-son leisure time.

Abdulmanap, who passed way back in July this year due to complications caused by COVID-19, is the primary reason The Eagle entered the world of combat sports. Abdulmanap was also Khabib’s coach and accompanied his son to each of his UFC matches, barring his latest victory over Justin Gaethje.

The small clip which Khabib shared to social media showed the 32-year-old trying to score a takedown on his father. Khabib can be seen trying to grapple his dad, looking to bring the latter down on the floor. Abdulmanap showed his experience as he prevented a takedown, proceeding to laugh at his son’s failed attempt. Khabib captioned the video stating, “It was the best time”. He even added a heart emoji next to ‘Father’.

Abdulmanap Nurmagomedov had been in hospital after he suffered a heart attack following aggravated pneumonia brought on by COVID-19. He died in the state of an induced coma on July 3, 2020.

Khabib’s victory over Justin Gaethje at UFC 254 was the Russian’s first professional fight without his father standing ringside. Khabib scored the third successful defence of his lightweight title after a Round 2 submission victory over Gaethje. The 32-year-old then went on to announce his retirement from the sport, sending shockwaves through the entire MMA community. Khabib explained his decision stating he did not want to do it without his late father and that he also made a promise to his mother that the fight against Justin will be his last.

“There’s no way I’m going to be back without my father. When UFC called me about Justin (Gaethje), I spoke with my mother for three days. She doesn’t know how I fight without father, but I promised it’s going to be my last fight, and if I give my word, I have to follow it,” he said during the UFC 254 post-fight interview.

While reports do indicate Khabib could be back for potentially another fight, as of now, the Russian remains retired, having achieved his last remaining UFC goal – to become No.1 Pound-for-Pound fighter in UFC. Khabib leaves the sport with an immaculate 29-0 career with wins over the likes of Conor McGregor, Dustin Poirier and now Justin Gaethje under his belt.