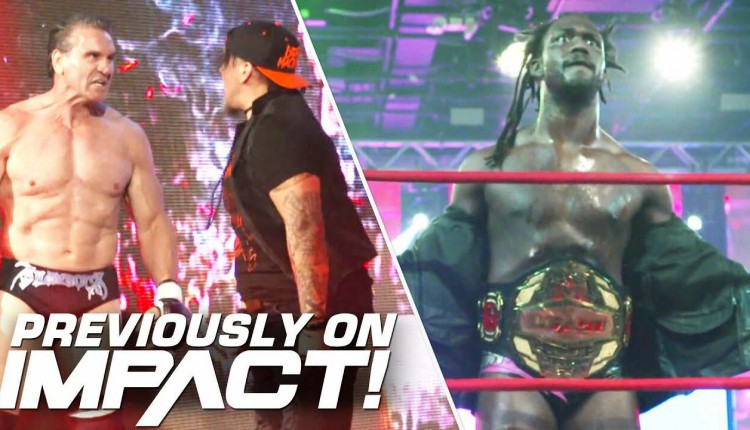 Welcome to PWrestling.coms live coverage of Impact Wrestling, which airs every Tuesday on AXS TV, as well as on Impact Wrestling’s own Twitch channel at 8 pm EST! Be sure to chime in on your thoughts about tonight’s show in the comments section below. Additionally, share our live coverage through social media. Make sure to click the REFRESH button to continue to get the most current up to date coverage. Above and below is what’s on tonight’s agenda for Impact:

Josh Mathews and Madison Rayne welcome fans to Impact Wrestling! We kick things off with a tag team grudge match!

MCMG waste little time as they bring the fight to XXXL before the bell rings. MCMG lays a flurry of punches. Both members of XXXL spill outside of the ring. Alex Shelley flies off the top rope with Larry D. Shelley tags in Chris Sabin, who also flies off the top with an elbow drop before tagging Shelley back in. Acey Romero is also tagged in and bullies Shelley towards the ropes. Shelley finds some defense with a few short kicks before tagging Sabin back in. Romero tosses Sabin into onto the mat with an old school powerslam.

All four men make their way into the ring. Romero drops Sabin on top of Shelley’s back. Romero lands a shot before tagging Larry D back in. XXXL tries to stretch Shelley out in the center of the ring. Sabin runs in to break it up. Larry D corners Shelley with a powerful uppercut. He looks for the first cover. Shelley puts his foot on the bottom rope before the 2 count. XXXL crash into Shelley. Romero drops on top of Shelley with a senton. Sabin comes in to break up the second pinfall attempt. Sabin and Larry D are both tagged in. Shelley lands some quick strikes and an enziguri. He connects a DDT right after. Larry D hangs in the corner. Sabin and Shelley perform a missile dropkick/flatliner combination.

XXXL join forces for a backbreaker combination. Sabin kicks out of the cover at 2. Larry D misses a chance at connecting a splash off the top. Sabin lands a bulldog on Romero in the center of the ring, followed by a double suplex. MCMG sweep the win after a double dropkick and a neckbreaker.

Outside: Scott D’Amore confronts Sami Callihan and Ken Shamrock for their heinous acts on Eddie Edwards last week. D’Amore informs Shamrock that he’s suspended for a month. Callihan proceeds to make his way into the building.

Backstage: A healthy and recovered John E. Bravo confronts Larry D for trying to kill him. Last week, Larry D’s alter-ego, Lawerence D, confessed that he shot Bravo because he was in love with Rosemary first. Tommy Dreamer breaks up the fight between Bravo and Larry D. Dreamer does not believe that Larry D was “set up.” Dreamer wants him to go downtown with him so he can explain what happened. Larry D turns around and cold – cocks him.

We head back to the ring to continue the opening rounds for the Knockouts Tag Team Title Tournament!

Jordynne Grace and Killer Kelly begin the match. Both powerhouses take one another down with every takedown they know. Grace looks for a sunset flip. Killer Kelly reverses it with a jackknife pin. Both women roll out, and Renee Michelle and Jazz now make their way into the ring. Jazz rubs her forearms across Michelle’s face. Both women make their way up. Jazz hits Michelle with a forearm to the back. She tags Grace back into the ring. Michelle creates some separation with a back elbow and a dropkick.

Coming back from the break, we see Michelle has Grace cornered. She drives her boot into Grace’s throat before using a snapmare on her, which pushes her towards the center of the ring. Michelle then tags in Killer Kelly. She slams Grace with a running boot. She looks for a pin. Grace kicks out at 2. Kelly brings the fight to Grace with a flurry of punches. Michelle quickly makes her way back into the ring by landing more kicks on Grace in their team’s corner. Killer Kelly is back in. Grace slams Kelly onto the mat with a powerful spinebuster. This gives her a chance to tag in Jazz. Jazz is a one-woman machine. She throws Michelle out of the ring and centers her focus on Kelly. Grace makes her way back into the ring.

Grace hits Kelly with back and forth forearms. Kelly connects a devastating headbutt which sends Grace down on the mat. Grace positions Kelly for her Grace Driver. She hooks the leg; Michelle breaks the pin. Jazz is now the legal woman. Jazz sends Michelle out cold with the Jazz Stinger to gain the victory for her and Grace!

They will face Havok and Nevaeh in the semi-finals!

Following that, we see the Impact Flashback of the Week.

Backstage: Ethan Page is still furious about his loss against Swoggle last week. He admits that he took Doc Gallows out of action. He is challenging Karl Anderson for a match at Final Resolution on December 12. If Page wins, he and Josh Alexander want a shot at the Impact World Tag Team Championships.

Backstage: Tenille Dashwood and Kaleb (With A “K”) find Alisha Edwards, who is looking for Sami Callihan. She ignores everything Dashwood and Kaleb are saying. She sees Callihan making his way down the hallway and jumps on his back. Security comes in and breaks them up.

Next, the now innocent Johnny Swinger makes his way out of court and into the ring!

Nobody on the IMPACT roster is safe from @TheEricYoung and Joe Doering. #IMPACTonAXSTV pic.twitter.com/y4YahYpLBx

Post-Match: Eric Young warns the Impact locker room that the world belongs to them. And they’ll keep proving it every week.

Backstage: The Knockouts Champion Deonna Purrazzo and Kimber Lee find Father James Mitchell. They are going to head to the ring to go find Su Yung. They tell James to get ready.

Backstage: The Deaners are disgusted by Eric Young and Joe Doering’s interference just a few minutes ago. Cody Deaner and Young go way back to when Cody was just training to become a wrestler. He once called Young his family, but now, he wants to prove to the “World Class Maniac” that he’s not a nobody; he’s a somebody!

Deonna Purrazzo and Kimber Lee head on down to the ring. The Knockouts Champion is calling out Su Yung for her haunting presence the last couple of weeks. She says if she wants to end this, now is the time to do it. The Undead Bride’s music hits, and she arrives down to the ring! After, Father James Mitchell’s music hits. Father James Mitchell tells Su that he doesn’t want to do this, but he says that tonight, she will pay for her sins.

Eerie music begins to play, and Su’s former Undead Bridesmaids slowly walk down the ramp and surround themselves all around the ring. Deonna Purrazzo runs into the ring and drives her forearm into Yung. Purrazzo stops Yung in time before receiving the red mist and begins choking her. Purrazzo sends her out with her Cosa Nostra (gotch style piledriver). The Undead Bridesmaids lift Yung out of the ring and take her to the back.

What the hell did we just witness?!

Backstage: Moose informs Chris Bey before his match that real power isn’t given; it’s taken. He says if Bey does win a match against Rich Swann for the World Championship, he’ll be gunning for him next.

Backstage: Karl Anderson hates to interrupt with backstage interviewer Gia Miller has to say, but he wants to answer back to Ethan Page’s challenge for earlier tonight. For Doc Gallows, Anderson accepts Page’s challenge.

We head back to the ring for tonight’s title defense!

Crazzy Steve gets fired up at the beginning of the match with two schoolboy pin attempts on the champion. Rohit Raju kicks out each time. Raju rolls out of the ring and tells Steve and the referee that he wants to do things on his time. He walks around the ring before rolling back in the ring. Steve twists Raju’s neck with his feet. He follows it up with an Upside Down on the ropes. Raju drops Steve off his feet with a jumping flatliner. He goes for a cover, and Steve kicks out at 2.

Back from the break, both men are slugging it out with forearm shots in the center of the ring. Raju lands a big boot, sending Steve off his feet. He looks for a pin. Steve kicks out at 2 again. Rohit locks in a fisherman’s buster for another 2 count. The champion continues the on slot by driving his boot to Steve’s face in the corner. He connects a suplex before getting another near-fall at 2. He keeps his offense up and running with a knee strike to the center of Steve’s chest. Steve rises to his knees and taunts Raju with a crossbody off the top rope. He hooks the leg for a near-fall of 2 by the champ.

Rohit falls back in line with a jumping knee. Steve locks Rohit’s arms up. Rohit scoots his way over to the bottom rope for a break. Steve looks to put Rohit away with a crucifix, but Rohit drops down on him and grabs the win. Rohit retains his championship.

Backstage: Kiera Hogan and Tasha Steelz are fired up for their semi-finals match, but most importantly, they’re stoked to spend Fallah Bahh’s money. Bahh comes in and confronts the ladies on if they have the money. They lie and tell him they don’t have it. Steelz is holding the wad of cash behind her back. Johnny Swinger comes in and tries to hit on the ladies. They are not impressed with his pickup lines.

Backstage: Crazzy Steve and his monkey are having a little chat following Rohit Raju’s deceitful win. TJP comes in to check on Steve. Brian Myers also comes into the room to poke fun at Steve. TJP calls him out for his bullying ways.

Willie Mack puts his hand up for a test of strength lockup. Chris Bey slaps away Mack’s chances. Mack retaliates with a hard chop in the corner. Bey rolls off the back of Bey, who faces a bench press from Mack. Mack lays down a flurry of punches. Mack throws Bey up on the apron with a backbreaker. Bey takes out Mack’s knee.

Back from the break, Bey is going after Mack’s injured knee by twisting it up into a pretzel. Mack’s shoulders are down, but he brings them up in time to break the pin. Bey gets caught midair by Mack. Bey slips out to attack Mack’s hurt knee again with a single leg Boston Crab. Mack fights free with a hard shot towards Bey’s cheek. Mack finds his offense with a series of jabs. Mack sacrifices his knee with a drop on Bey for a 2 count. Both men make it back towards vertical positioning. Bey catches Mack with a rollup. Mack gets his shoulders up at 2. Mack lands a big shot and a final stunner to pick up the win!

Post-Match: Moose runs in and connects Lights Out on Willie Mack. The Impact World Champion Rich Swann runs in and sends Moose out of the ring. Chris Bey squashes Swann with his Art of Finesse. He holds up the World Championship as Moose looks on behind him.