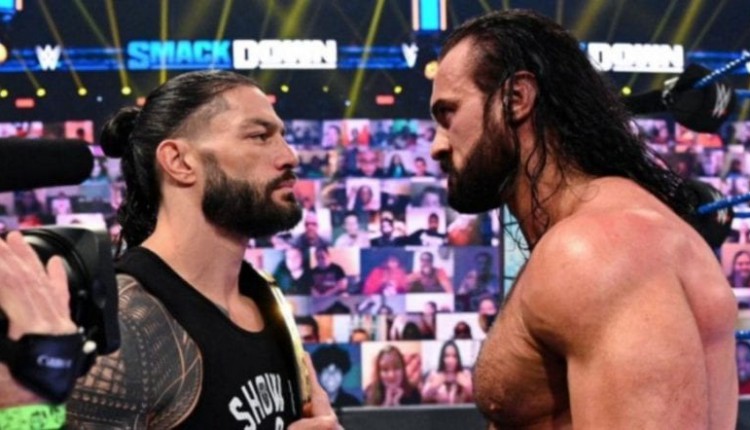 WWE Champion Drew McIntyre made an appearance on today’s episode of WWE’s The Bump and during it, he reflected on losing to Universal Champ Roman Reigns in a champion vs. champion match at the Survivor Series pay-per-view event.

McIntyre started out stating that the biggest thing to come out of their match was to show Reigns and the world what he’s capable of doing. He noted that he told Reigns and backed it up in the ring that he’s not the same guy that he was in the past, but on a new level.

“But he knows what I’m all about now. I guarantee that match is going to come back around again one day, and hopefully, it’ll be WrestleMania-level because it’s going to be a big freakin’ match and now Roman knows not to take me so lightly.”

McIntyre noted that he’s goal right now is to focus on the WWE Title and AJ Styles at TLC. He wants to put all of his energy in defending the top prize on Raw so he doesn’t know when a rematch will happen with Reigns. McIntyre stated that Reigns runs his mouth a lot and sees himself as untouchable.

“So I’m there to show him there’s a new sheriff in town, we’re both very competitive. When that match comes back around, Drew McIntyre is the number one guy in WWE.”

McIntyre later added that he understands the levels to be a top guy in WWE that Reigns has talked about. He went into character by talking about how Reigns took him lightly while working his way to the top and called Reigns’ heel attitude a piece of crap.

He did put Reigns over for getting it done in the ring and being entertaining. You can watch the entire interview by clicking on the player below (quotes can be found at the 15:11 mark):