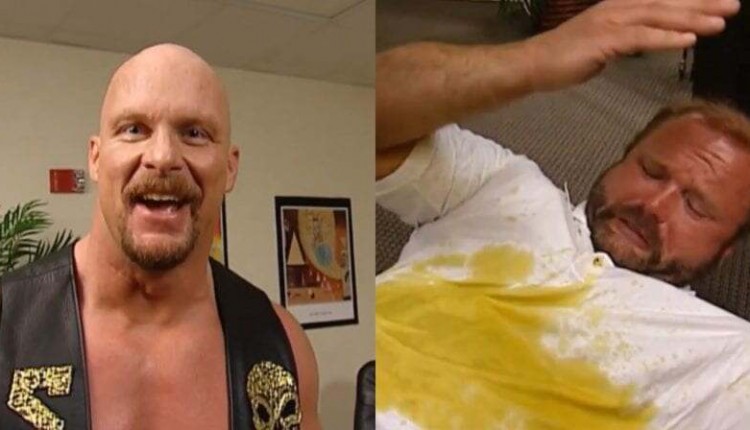 Arn Anderson answered fan questions this week on an “Ask Arn Anything” episode of AdFreeShows.com. Arn talked about the current wrestling landscape and he talked about the Old Age Outlaws, Uncensored 1996, Chick Donovan, the worst wrestling promoters and much more.

Arn was asked if Ric Flair would have gone to WWE in 1988 coupled with the fact that Arn, Tully Blanchard and J.J. Dillon were all there by 1989, would Vince McMahon consider using them as the Horseman:  “Never. He would have never used us in our entirety. It wasn’t his creation. He always liked to bring guys in that hadn’t been used at all somewhere else but had talent and put a different coat of paint on them and make them someone else and give them a character so they were now his creation. If you went totally with that flow, you would be ok because then you became a WWE guy. We could never, if we walked in that door with that gimmick in its entirety, I mean the heat would have been incredible in the locker room, but once the houses would jump as I knew they would, he would never have used us the way we should be used because he couldn’t take credit for creating us.  He would have never pushed us the way we should have been pushed.  It’s just one of those things he never would have agreed to do in a thousand years.”

Arn talks about the angle when Steve Austin urinated on him in 2002: “Two people that were heavily involved in it were Jack Lanza who was like the backstage producer and Austin himself. They both told me that they went to Vince individually and collectively and said, ‘This guy is heavily respected in the business with the boys and the audience as well. This is really demeaning. Can’t we do something else? Both got turned down, flatly. Do I suspect foul play and a reason in my mind to do this? Yes. Will it be very easy for his case to be, well, we don’t want to do it to Ric. It’s almost like you went out and put Austin over and got him ready for Ric for the next big PPV. You put him over clean in the middle but it’s just another way to do it. It could be punishment for leaving in 1989. He can wait a long time when he feels betrayed or feels like you’ve wronged him. We were the very first guys to turn our notice in during that era. I know he didn’t like it and you couple that with some other things and do I think that’s a possibility? Yes. I know he waits a very long time if he feels like you screwed him. I can possibly see that. It was just so degrading and demeaning if you looked at it from the outside in. I’m a guy that you know what popped up in my head when they said we want Austin to pee on over you? My wife and kids. But that’s the reason why I did it and did it smiling. That’s who I am responsible for. People may think that’s not true, but everything I’ve done in this business, every sacrifice I’ve made, every time I’ve had guys come to me that I respect and say, ‘You don’t have to do that. You’re Arn Anderson. You don’t have to do that bulls***t.  Just tell them no.’ I did what was requested to take care of my family. That’s my first responsibility on this Earth. He knows that anything he comes up with that is his idea that he wants to do for whatever reason, you can say no and find other employment. If you don’t say yes and do it with a smile, you may do with your teeth gritted and he’s going to know that and it’s like you didn’t do it at all so the punishment is going to be the same. He wants blind obedience in all of his requests and he doesn’t want you to have your own opinion unless it runs parallel to his. The audience knew he really didn’t pee on me although it looked the part.”

If you use any portion of the quotes from this article please credit ARN (Arn Anderson’s podcast) at AdFreeShows.com with a h/t to WrestlingNews.co for the transcription