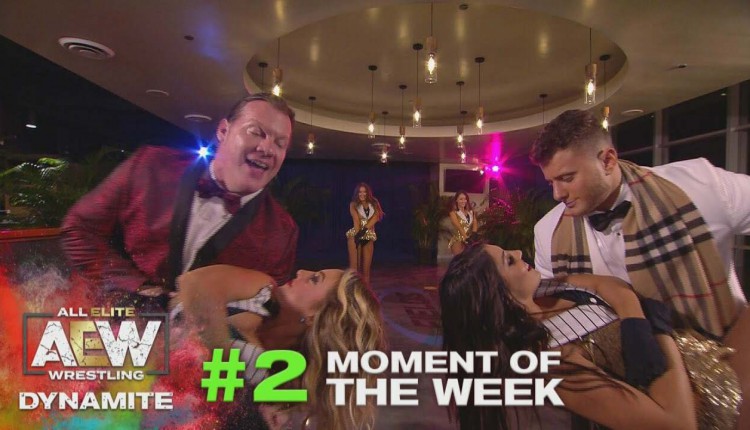 AEW is getting some unlikely praise from The New York Times this morning. In their list of “Best Performances of 2020”, the NY Times made sure to include Chris Jericho and MJF’s musical performance during “Le Dinner Debonair” among the top ranking performances of the year.

The NY Times review of MJF and Chris Jericho’s performance of “Le Dinner Debonair” can be seen below:

Some weeks the athleticism at this professional wrestling start-up is more exciting than anything happening in Vince McMahon’s empire. And no one in the WWE has this kid’s combination of diction (Juilliard by way of Long Island), intensity or cheesiness, either. Even when Friedman’s lost his cool (his nom de ring is MJF), he still has astounding control. The character is part heel, part tool (hair gel, loafers, Burberry bling — tacky, tacky, tacky) and part goodfella wannabe; his mouth does more running than he does. For reasons only the producers of this show can explain, a long segment in October between MJF and the veteran Chris Jericho culminated in a version of “Me and My Shadow” complete with dancing women and live singing. It was less than spectacular, though not for anything Friedman did. He wasn’t embarrassed at all. He was smooth in a way that should worry Ric Flair. This kid makes you wanna say, “Woo!”

It’s interesting to note how much the reviewer specifically focuses on the talent of MJF, even drawing comparisons to Ric Flair at the end. It’s been reported that Friedman was the person that originally came up for the idea of the musical segment after watching the film, Rocketman, a 2019 biographical musical film based on the life of British musician Elton John.

As noted after this past week’s AEW Dynamite, it’s unclear if MJF and Chris Jericho will continue working in tandem. Jericho has given his stable, Inner Circle, until Wednesday to reache an ultimatum about whether or not they want to work together.

The New York Times newspaper was founded back in 1851 and has won 130 Pultizer Prizes while active, more than any other newspaper.